Published May 2014  •  Updated August 2022  •  Read Time: 7 minutes
Aquamarine is the blue variety of Beryl, and very closely related to Emerald.  Aquamarine is found scattered in mines around the world, but never in large enough quantities to justify its own mine.  Instead it is a secondary mineral minded alongside others minerals such as Black Tourmaline.  In the fine gemstone industry, transparent Aquamarine is sometimes heat-treated to bring out a more vibrant color, but most of the specimens sold to collectors are completely natural. Aquamarine healing powers have been written about since antiquity and it has long been associated with mermaids and sailors.

Aquamarine encourages spiritual growth and greater awareness. It invites us to value deep and clear thinking in our spiritual life and to take the lessons of the spiritual world and put them into good action here on earth. If we find ourselves casually believing something that we don’t really understand, Aquamarine pushes us to learn more and to stay curious, especially about the deep mysteries. It asks us to keep learning, rather than pretending we already have everything figured out. Aquamarine inspires us to step into our power and to use our knowledge in service of Goodness and Light. Aquamarine reminds us to remain upright in all of our dealings and to always behave honorably. As a communication stone, it can help us to speak our truth calmly and accurately, as well as to clearly understand other people’s positions and beliefs. It is an excellent scrying stone and increases the accuracy of our intuition and clairvoyant gifts.

Aquamarine reminds us why we love the people we love, and to be more consciously aware and kind towards them. It brings a lighthearted energy and helps us cultivate a happy and peaceful disposition. Aquamarine encourages moderation and can help judgmental people become more tolerant and compassionate. It can also teach us to own our actions and to take responsibility for the situations we create for ourselves and others. Aquamarine can help us discard old “baggage” and move forward into a better future. It also encourages us to speak diplomatically, so that our own truth gets heard and so we can truly understand other people’s perspective and needs. Aquamarine helps us to navigate through tricky conversations and create win-win solutions.

Aquamarine encourages a love of learning and an insatiable intellectual curiosity. It assists us in rapidly digesting information and in finding the words to explain our understanding to others. When we are faced with complexity, Aquamarine helps us to calmly study the situation so that we can see the big picture, notice the little details and discover how it all interconnects. Aquamarine unites logic with intuition so that we can use all parts of our brain to better understand the world. Aquamarine encourages us to always be prepared so that we can confidently face whatever comes our way. It clears up confusion and encourages us to be more organized, both in thought and in practice. It helps us to stay focused, be honest, and remain persistent in the face of difficulties. It is a fantastic talisman for students and researchers.

Aquamarine is recommended when we are dealing with complex physical issues that require deep thinking. It reminds us to stay calm and not allow fear to jump to conclusions or to dictate our course of action. Aquamarine encourages us to talk to experts and to carefully consider our options. It helps us to be open to new ideas and treatments and to stay patient while we figure things out. It is an excellent talisman when we are dealing with issues affecting the pituitary or thyroid glands, as well as the eyes and throat in general. Aquamarine is also a good talisman for anyone suffering from autoimmune diseases, especially if triggered in part by stress.

Buy Aquamarine or Crystals with a Similar Energy

Where does Aquamarine come from?

Aquamarines can be found in many location around the world.  Some of the most beautiful specimens come from Afghanistan, Angola, Austria, Brazil, China, India, Italy, Namibia, Nepal, Pakistan, Russia, United States and Vietnam.

Aquamarine is mined at its primary deposit, still in in relationship with the host rock.  It is usually found in small veins or on the walls of cavities.  These deposits are often found deep underground. It is always a secondary mineral mined alongside a variety of minerals.

The transparent Aquamarines used in fine jewelry are sometimes heat-treated to bring out a more vivid color.  Heat-treatments can be done at lapidaries, but are sometimes done directly at the mine.  Opaque Aquamarines and collector’s pieces are typically fully natural, enhanced only by cutting and polishing.

Aquamarine is the blue variety of Beryl, a Silicate mineral. Silicates are minerals which contain the elements Silicon (a light gray shiny metal) and Oxygen (a colorless gas). Together, these two elements form a tetrahedron – a shape similar to a pyramid – with a Silicon atom in the center and Oxygen atoms at each of the four corners. These tetrahedra connect with other chemical structures, in six different ways, to form various minerals and rocks. There are six main groups of Silicate minerals, and these main groups are further subdivided into secondary subdivisions, such as Quartz, Feldspar, and Beryl. Beryl is a unique family in that all of its members are considered “gemstones” rather than just minerals.

Aquamarine’s energy works well with its family – other Beryl.  Try it in combination with Emerald, Heliodor, and Morganite 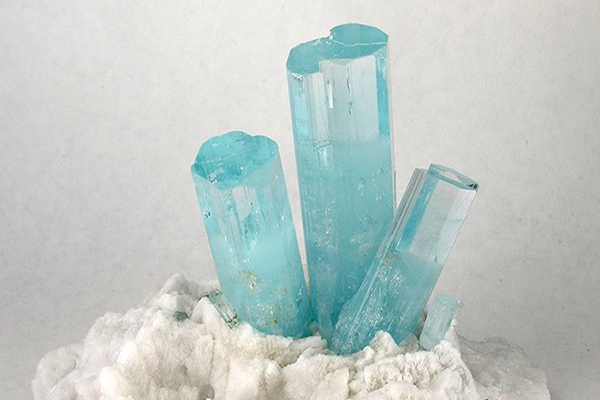 Aquamarine is typically formed in igneous rocks, particularly Granite. On rare occasions, it is found in sedimentary rocks such as Shale or Limestone. Beryl crystals form as columnar, hexagonal prisms. Aquamarine forms larger and more transparent crystals than Emerald or other Beryl varieties. Its rich blue color is imparted by trace amounts of iron in colorless Beryl.

Aquamarine’s energy works well with its “friends” – crystal associates formed in the same geological environment.  Try it in combination with Black Tourmaline, Muscovite, and Smoky Quartz

Aquamarine has a very ancient tradition as a healing stone. In 1609, it was officially named Aquamarine, Latin for “sea blue,” by Anselmus de Boodt in his gemstone book, Gemmarum et Lapidum Historia. Prior to that, it was simply called “sea-green beryl”. It has been used by sailors as a talisman against drowning for centuries.

The earliest reference to beryls was recorded in De Virtutibus Lapidum in the 2nd century BCE. It stated, “This stone is good…for damage to the eyes, and for all sickness if it is put in water and given as a drink.” A century later, Pliny the Elder discussed aquamarine in his Natural History. Book 37, “The Natural History of Precious Gemstones,” focused exclusively on the Beryl family. Of Aquamarine he wrote, “The most esteemed beryls are those which in color resemble the pure green of the sea…which seems to have come from some mermaid’s treasure house, in the depths of the summer sea, its charm not to be denied.” During the Roman era, Beryls were thought to have the energy of “young love” and were the traditional gift given to a bride by her groom the morning after their wedding. According to an old Roman legend, “When blessed and worn it joins in love and does great things.” It was also believed that Aquamarine’s color would change to reveal truth and lies, friends and foes, as well as the fidelity of a lover.”

During the Middle Ages, Beryl was the most popular “oracle crystal”. Most commonly the Beryl would be hung from a string and used as a pendent. However, according to the 17th century scholar Sir Reginald Scot a Beryl could be supercharged by a ceremony, conducted at sunrise on a day with clear weather. stthomasHe described the ceremony in his book, Discoverie of Witchcraft, which also provided many testimonials for its effectiveness, but only if carried out exactly. “A child, born in wedlock, was to take the crystal in his hands, and the operator, kneeling behind him, was to repeat a prayer to St. Helen, that what he wished would become evident in the stone. The finest stone would manifest an image of the saint in her angelic form, and answer any question asked of her.”

Beryl has been the symbol of the apostle St. Thomas since the 10th century. The association was first determined by Andreas Bishop of Caesarea, one of the earliest writers to associated the apostles with the Foundation Stones of Revelation 20:1. He wrote: “The beryl, imitating the colors of the sea and or the air, and not unlike the jacinth, seems to suggest the admirable Thomas, especially as he made a long journey by seas, and even reached the Indies, sent by God to preach salvation to the peoples of the region.”