Published February 2015  •  Updated June 2022  •  Read Time: 5 minutes
Buddstone is a soft metamorphic rock found only in South Africa.  It is often found growing with Verdite, another green metamorphic rock.  Both stones get their coloring from Fuchsite, and sometimes the stones are confused by sellers who use the names interchangeably.  They are also sometimes confused with Green Jade because all three have a similar buttery texture when polished.  But, Buddstone is a wonderful crystal to get to know in its own right.  It offers us the wisdom of our ancestors, stretching all the way back to our ancient grandfathers and grandmothers who lived as hunters and gathers at the dawn of time.  It is a phenomenal crystal ally for healing ancestral trauma in ourselves and our community.

Buddstone offers us the wisdom of our ancestors and gives us the strength and fortitude to use this wisdom in the modern world. It can also help us to better understand our own distinct family line, cultural habits, and belief systems. Buddstone encourages us to look more closely at our own beliefs with discernment and compassion, and to choose only those beliefs which best serve us and the Greater Good. Buddstone can also be used to activate the Kundalini Spirit and help it to rise to the heart level. Buddstone is attuned to the Heart Chakra and linked to the astrological sign of Taurus. It is connected to the element of Earth and vibrates to the number 2.

Buddstone has a very calming and soothing energy which helps us to feel safe enough to do our emotional “work.” It encourages us to acknowledge our own rough spots and edges, and to actively work to smooth and polish them. Such work is done for our own sake, in order to become more emotionally mature and better able to hand the twists and turns of life with grace and dignity. Buddstone reminds us that when we have a steady emotional foundation to build upon, it is easy to accomplish great things.

Buddstone is a fantastic stone for anyone who needs to be more organized and focused. It shows us the quickest and most direct path to any solution, making it a valuable tool for resolving complicated problems. Buddstone encourages discernment and cooperation. It can help us to see commonalities and differences between groups of people and ideas, allowing us to more effectively work with them for the highest possible mutual benefit. Buddstone would be a beautiful talisman stone for anyone who is involved in a nonprofit organization.

Buddstone has been used by metaphysical healers to treat the physical heart and circulatory system problems. It is most often used to increase the flow of energy throughout the body.

Buy Buddstone or Crystals with a Similar Energy

Where does Buddstone come from?

Buddstone is found in South Africa and Zimbabwe.

The majority of Buddstone on the market was mined in association with Verdite. Both green stones are a by-product of the Gold and Garnet mining industries.

All Buddstones are completely natural, enhanced only by tumbling, cutting, and polishing.

There are disagreements in the scientific community about Buddstone and Verdite.  For more details, please see the History of Buddstone.

Buddstone is not a mineral, but rather a type of metamorphic rock. In order to understand the difference, think of rocks as being like cookies and minerals as being the ingredients which make up those cookies. Many different minerals are used to create a rock! Buddstone is metamorphosed Chert, a fine grained sedimentary rock which comes in many colors, but is most commonly grey or brown. Buddstone gets its beautiful green color from inclusions of Fuchsite as well as other green minerals such as Chlorite and Epidot.  While sometimes referred to as a type of “African Jade”, it is only distantly related to the Jade family.

Buddstone’s energy works well with its family – other metamorphic rocks.  Try it in combination with Cinabrite, Nuummite, Picasso Marble, and Unakite Metamorphic rocks are created when an existing Igneous or Sedimentary rock (or potentially another type of Metamorphic rock!) is subjected to new pressures and high temperatures. This causes the atoms and molecules to rearrange themselves into new minerals while still in a hard solid state.

Buddstone comes from southern Africa.  It is a difficult stone to trace historically because scientific sources contradict each other about whether Buddstone and Verdite are distinct stones or just different names for the same stone.  For example, the manager of Geology.com, who has PhD in geology, states that Buddstone is a type of Green Chalcedony, while Veredite is a metamorphic rock.  In most cases, his words would carry great weight.  However, another geologist and author on mindat.com say that Buddstone, Veredite, and African Jade are all just trade names for the same metamorphic rock.

After careful consideration, the owner of Moonrise Crystals agrees that Buddstone is a tradename for a metamorphic rock.  The tumbled minerals shown on Geology.com as Buddstone do in fact seem to be Green Chalcedony and match the Chrome Chalcedony found in the same region.  But neither of them resembles the tumbled stones that are commonly being sold as Buddstone!  Moonrise Crystals specializes in tumbled stones and buys Buddstone from a polisher in South Africa where the stone is mined.  After studying numerous sculptures from Zimbabwe that are made of Verdite or African Jade, it is seems very likely that Buddstone is another name for the same pretty green rock.  Most of the time crystals are without borders.  But in this case, it appears that political borders matter.  When the stone is found in South Africa it is more likely to be called Buddstone, but when it is mined in Zimbabwe it is more likely to be called Verdite.  African Jade is a misnomer, which relies on the name recognition of Jade to drive up prices, much like a "Cape Emeralds" can drive up the price of a South African Diopside.

Whatever the name, it is easy to carve and take a lovely polish.  Local sculptors in the region carve them into beautiful works of art.  For example, consider this Zimbabwean sculpture, Pondering Chief, carved by Simbai Kamombo. 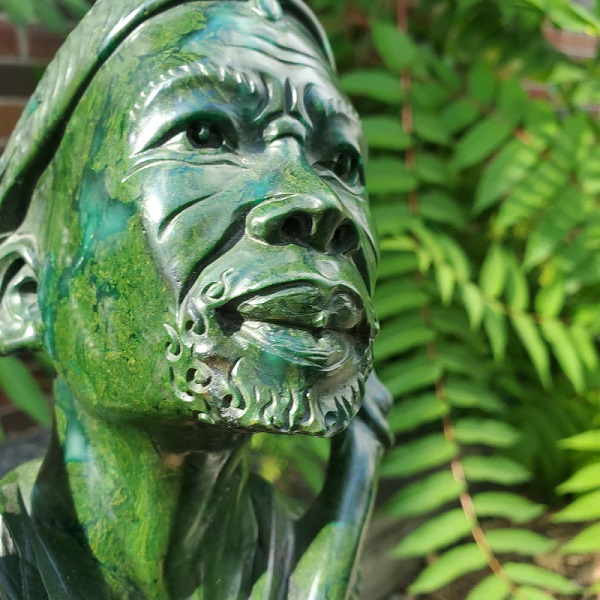