Published July 2015  •  Updated September 2022  •  Read Time: 7 minutes
Crazy Lace Agate is a rare Agate found only in northern Mexico.  While most Agates have straight bands, Crazy Lace has wavy bands that spiral and bounce and go in every direction.  The best pieces are brightly colored, with vivid reds and yellows predominating.  It was formed at the end of the dinosaur era when Mexico was undergoing major geological changes which gave the stone is fun pattern.  Crazy Lace Agate has a joyful energy that reminds us to not sweat the small stuff and to play as much as we work.  It is a fantastic choice for anyone who wants to let go of negative thinking and start to enjoy the present moment more fully.

Crazy Lace Agate is a playful stone that joyful pushes us to approach the world with a sense of wonder, adventure and excitement. It teaches us that children, and those with a child-like heart, are closest to the Divine. It is a fantastic talisman for mystics who are in the midst of a zany love affair with the Divine and model themselves after such Perfect Masters as Hafiz and Rumi. Crazy Lace Agate encourages us to follow our own spiritual path and leave dogma behind.

Crazy Lace Agate inspires lifelong happiness and contentment. It reminds us to not sweat the small stuff and to know the difference between worries we can influence and worries that our outside of our control. It reminds us that in order to stay in balance, we have to be flexible, rather than rigid. Depending on the day, we may need to roll with the punches or we may need to relax our inhibitions and just dance. No matter the day, Crazy Lace Agate encourages us to enjoy the present moment as best we can. Like all Agates, Crazy Lace has a soothing and grounding energy that is subtle yet strong. It is a stone of faith and trust, helping us to know that we are supported in our lives by the Divine as well as by those who love us and have our best interests at heart. If we start to take ourselves too seriously, Crazy Lace Agate teases us until we loosen up. It reminds us that having a relaxed and cheerful attitude will always make life a little easier and more pleasant for one and all.

Crazy Lace Agate is a fantastic stone for anyone who is working on changing their thought patterns to a more positive vibration. It helps us to look at our belief systems objectively and laughingly dismiss those beliefs which no longer serve us. Crazy Lace Agate reminds us that we have the ability to change and shape our thoughts, and by so doing we change our reality. If we are in a mental fog or feel emotionally exhausted, it encourages us to take a break and shake it off. If we have a habit of constantly being busy and don’t have time to relax or play, Crazy Lace Agate will tease us relentlessly until our seriousness breaks. It reminds us that all work and no play, makes us dull and unhappy. Likewise, a rested mind and a contented soul, will always be more productive and creative.

Crazy Lace Agate reminds us that laughter is the best medicine. This isn’t just an old adage, laughter literally triggers the release of endorphins to relieve pain, decrease blood pressure and relax muscles. In the short term, laughter increases our intake of air, stimulating the heart and lungs. In the long term, it reduces the chemical stress reactions that weaken the immune system. So Crazy Lace Agate urges us to laugh long and laugh often for a happy and healthy life! Crazy Lace Agate is also a wise friend if we are feeling medically disempowered. It helps us to be our own healthcare advocate, rather than waiting for someone else to fix us or tell us what to do.

Buy Crazy Lace Agate or Crystals with a Similar Energy

Where does Crazy Lace Agate come from?

Agates are found all over the world.  The variety called Crazy Lace Agate is found only in Mexico, mainly near Mt. Sierra Santa Lucia in Chihuahua.

Crazy Lace Agate is mined in it’s primary deposit in association with the igneous rock in which it formed.  Unusual for an Agate, it is the primary focus for a few small mines.  Agates are common minerals that not valuable enough to be the primary focus of any large-scale mining operation.  Normally Agates are mined in tandem with other precious metals and minerals in small-scale and artisanal mines, especially if the stones are particularly colorful or distinctive.  Crazy Lace Agate are particularly attractive and the deposit is large enough to make it economically worthwhile. 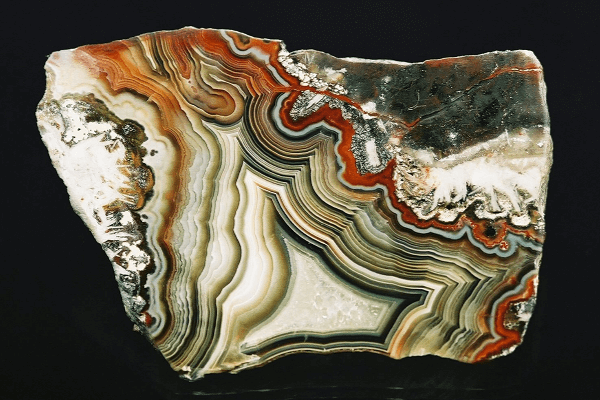 Agates are created after a volcanic explosion has transformed magma and lava into igneous rock. During the cooling down period, various gases form bubbles, which then become hollow spaces in the igneous rock.  Agates are formed long afterwards, when silica-bearing water permeates the rocks and begins to fill the hollow spaces.  Sometimes the hollow fills quickly and the resulting Agate is a solid color or has a random scattering of trace inclusions.  Depending on which inclusions are added, the Agate will take on a variety of different colors, patterns and transparency levels.  Banded Agates are formed more slowly, with one layer of silica-water solidifying, before another layer is deposited on top.  This sequence is repeated over and over until the hollow is filled.  Some of the layers will have picked up different trace elements or different quantities of the same element, resulting in bands of different colors.  In the case of Crazy Lace Agate, later geological activity heated and soften the original agate and pushing and bending the bands into lacy pattern.

Crazy Lace Agate was first documented in 1895, but weren’t actively mined until the mid-20th century. While most Agates in the region were formed roughly 38-44 million years ago, Crazy Lace is found exclusively in a limestone layer that dates back to the much older Cretaceous Age (90-64 million), the final period of the Dinosaur Era.  During the mid-Cretaceous, northern Mexico was covered by a series of shallow bays and swamps linked to the Sea of Tethys.  Vibrant estuaries and islands dotted the area, provided a home for wildlife.  Among them was Coahuilaceratops whose impressive four-foot horns were the longest of any horned dinosaur.  Tectonic uplift caused the waters to gradually recede, and the clay at the bottom of the bays turned into limestone, preserving fossils and forming agates.  Crazy Lace Agates shows that there must have been a great deal of geological activity in the region, since the layers in the stone have been pushed and pulled, forming unusual patterns rather than laying in simple straight lines.