Published May 2018  •  Updated August 2022  •  Read Time: 7 minutes
Gray Agate is a common crystal found in many locations around the world.  They often wash up on beaches or can be found in riverbeds, where the water has naturally tumbled and polished them.  Some of the Agates will be a solid color, possibly translucent depending on the thickness of the stone, while others have subtle bands of light and dark gray.  Gray Agate a stone of grounding and patience.  It resonates with true “common sense,” a quality that is sometimes lacking in the modern world.  It helps us to think and act sensibly, based on reality rather than what we wish was true.  It encourages us to make sure that our “castle in the sky” dreams have a solid foundation on the good earth.

Gray Agate has a very calm, gentle and steady presence, which encourages us to be more conscious of our thoughts and feelings and their effect on our long-term well being. Gray Agate stabilizes the aura and balances our yin and yang energies. It also shows us how to be in better balance with the larger world around us. It aids us in seeing the positive and negative forces that exist in the world, and to be both realistic about our limitations and empowered in our possibilities. It helps us to walk through “the real world” with greater ease, neither giving in to despair nor sheltering ourselves from painful realities. Gray Agate invites us to help raise the collective consciousness, starting with ourselves and our loved ones, and then extending steadily outward to eventually embrace the whole world. Gray Agate shows us that we can, in fact, create a better world where all beings are safe and given the means to grow and thrive. But first, we must personally embrace a more mature spiritual path where fear is no longer a driving force in our lives. Gray Agate is also useful tool for remembering past lives and prenatal memories.

Gray Agate dissolves inner tension and turmoil. It helps us to calmly make good decisions that will best support our Highest Good and the Highest Good of those around us. Gray Agate releases the anger, fear, and bitterness that has gotten trapped in our heart and helps us to better understand the complexity of human emotions and responses. It specifically helps us to correctly identify the forces that are causing the most discomfort in our lives and to find practical solutions for them. It counsels patience too, reminding us that healing and progress sometimes takes considerable time and effort. Gray Agate inspires feelings of emotional safety and security. It is also a fantastic stone for increasing emotional intelligence and maturity.

Gray Agate encourages analytical thinking and a love of truth.  It helps us to see what is truly real, rather than forcing facts to conform to our expectations and desires.  Gray Agate counsels us to be cautious about our instinctive emotional reactions, and to not allow them to hijack our sense of reason.  It helps us to be more comfortable with complexity.  Unsurprisingly, Gray Agate is particularly good at helping us see “the shades of gray” that often exist.  It quietly reminds us to avoid dividing the world into overly-simplistic categories of “good” and “bad.”  Gray Agate aids mental concentration and encourages us to stay calm even under pressure.  It helps us to engage in honest self-analysis when needed and to be precise in our thinking and conclusions.  Gray Agate encourages quiet contemplation and a willingness to continually refine our beliefs based on new knowledge and experiences.

Gray Agate is used by metaphysical healers to stabilize physical health and to encourage healthy digestion and elimination.  Gray Agate is believed to support the uterus and is thus considered a valuable pregnancy stone.  It is said to protect and encourage the healthy growth of the infant in utero.  It is also said to encourage a normal delivery and to help the mother recover swiftly after childbirth.  Like other Agates, Gray Agate is said to be extremely good for eye health.

Buy Gray Agate or Crystals with a Similar Energy

Where does Gray Agate come from?

Agates are found all over the world, most of them white, gray or brown.  Particularly beautiful specimens have been found in Argentina, Australia, Botswana, Brazil, Czech Republic, Germany, Hungary, India, Italy, Mexico, Morocco, Namibia, Poland, Russia, Slovakia, United Kingdom, and the United States.

These Gray Agates were mined in a secondary alluvial deposit.  They were formed upstream and through natural erosion ended up in a river bed.  Agates are common minerals that not valuable enough to be the primary focus of any large-scale mining operation.  Most varieties are mined at their primary deposit in tandem with other precious metals and minerals in small-scale and artisanal mines, especially if the stones are particularly colorful or distinctive.  Agates are usually ball or almond-shaped nodules ranging in size from a fraction of an inch to several yards in diameter.  If the Agate fills the entire hollow space left by the gas bubble, it is called an Agate Almond.  If a hollow remains in the center, it is called an Agate Geode. 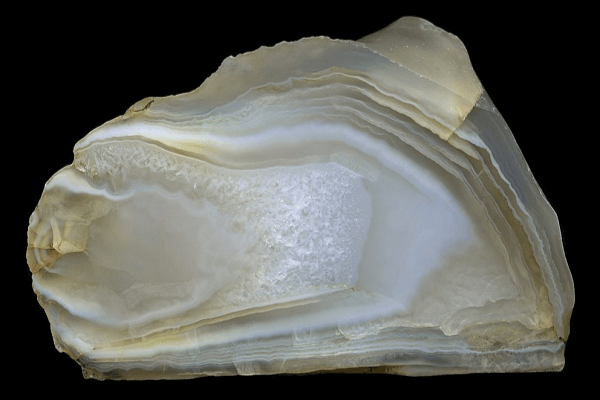 Agates are created after a volcanic explosion has transformed magma and lava into igneous rock. During the cooling down period, various gases form bubbles, which then become hollow spaces in the igneous rock.  Agates are formed long afterwards, when silica-bearing water permeates the rocks and begins to fill the hollow spaces.  Sometimes the hollow fills quickly and the resulting Agate is a solid color or has a random scattering of trace inclusions.  Depending on which inclusions are added, the Agate will take on a variety of different colors, patterns and transparency levels.  Banded Agates are formed more slowly, with one layer of silica-water solidifying, before another layer is deposited on top.  This sequence is repeated over and over until the hollow is filled.  Some of the layers will have picked up different trace elements or different quantities of the same element, resulting in bands of different colors.  Gray Agates may be solid gray or have bands of darker and lighter gray.

Gray Agate’s energy works well with its “friends” – crystal associates formed in the same geological environment.   Try it in combination with Snow Quartz.  Try it also with other  alluvially-mined crystals in India such as Ruby and Shiva Lingam