Published July 2021  •  Updated July 2022  •  Read Time: 7 minutes
Lithium Quartz is a rare Clear Quartz with a minor lithium inclusions which gives the Quartz a soft pinkish-purple blush.  While Lithium mining typically occurs on an industrial level with a major environmental impact, in countries like Argentina, Chile and China.  By contrast, Lithium Quartz is mined exclusively in Brazil at an artisanal level with a low environmental impact.  Lithium has been used to clinically treat mental disorders since the mid-20th century.  Lithium Quartz is a spiritual talisman that can help us to better manage anxiety and depression.  Its energy can help us to understand the root cause of our distress and make appropriate changes to support our mental wellbeing.

Lithium Quartz has an exquisite energy that sings of love and tranquility.  It is a phenomenal anchor stone for Loving-Kindness meditations when we focus on sending benevolent thoughts and vibrations, both inward and outward.  Lithium Quartz calms the mind and opens the heart.  It helps us to be present and focused on the essential task at hand.  It releases distracting thoughts, but reminds us that distracting thoughts are normal and we don’t need to feel bad when they try to intrude.  We simply acknowledge and release them again and again, bringing our attention back to our Loving-Kindness meditation.  Lithium Quartz is perfect for meditation mantras such as “May we all be safe” and “May we all be at peace.”  It is also a wonderful stone for gardens, transforming them into sanctuaries from all the strife of the outside world.  It can attract devas and nature spirits who will happily move into the garden and help make it even more magical and blissful.

Lithium Quartz has a very calm energy that is comforting when we feel anxious or disempowered.  It helps us to pause and actually notice the feelings in our body, the thoughts in our mind, and the emotional conclusions that we are making.  It asks us to be a little suspicious of our immediate emotional conclusions, especially if they make us feel helpless or hopeless.  Sometimes we jump to the wrong conclusions out of habit, or because of false beliefs, or maybe we just rush forward with incomplete information.  Lithium Quartz invites us to slow down.  There is no need to rush to conclusions without thinking things through.  Lithium Quartz shares a secret with us – the end of the story is, “and they all lived happily ever after.”  So if the conclusion we’ve drawn isn’t happy yet, it’s only part of the story, it’s not the end! Lithium Quartz delights in “happily ever after” for individuals as well as for couples.  It is a fantastic stone for romantic partners.  It increases the love and harmony between the couple and protects the lovers from negative outside influences.

Lithium Quartz helps us to stay focused yet relaxed.  It councils us to concentrate on our daily tasks, while still being able to gracefully pivot if something comes up that requires our immediate attention.  Lithium Quartz encourages us to feel hopeful for the future.  It invites us to dream and scheme and find out what delights us.  It asks us to have clear intentions about the kind of life we want; for example a happy life or a peaceful life.  But also to not worry too much about how that good life is achieved.  Sometimes life doesn’t work out according to our plan, but that doesn’t mean life isn’t working out according to The Plan.  Lithium Quartz asks us to trust that there is a Divine Plan that includes our happiness and peace.

Lithium Quartz is recommended for anyone who suffers from panic attacks and all the unsettling physical reactions that accompany them.  Lithium Quartz’s calm and loving energy can help us to regain control over our stress response, both emotionally and physically.  It helps us to take some deep breathes, re-center ourselves back in the present moment, and remind ourselves that the threat is just in our mind, it’s not a real threat in the outside world that requires a response.  Lithium Quartz is a fantastic talisman for anyone who is taking anti-depressants or other mental health medication.

Buy Lithium Quartz or Crystals with a Similar Energy

Where does Lithium Quartz come from?

The primary commercial deposits for Lithium enclosed in Clear Quartz are in Brazil. However, Lithium Quartz may also be found in small quantities in any lithium-rich pegmatite, alongside Kunzite and Lepidolite.

Lithium Quartz is mined artisanally. Lithium is industrially mined in several countries, with the majority mined in a brine-bath from sedimentary rocks. Of the industrial mines that process lithium from igneous ore rocks, none of them have a financial incentive to set any Lithium Quartz aside.

Lithium Quartz is a natural stone enhanced only by cutting and polishing.

Lithium Quartz is a Clear Quartz with minor Lithium inclusions, rather than a distinct mineral in its own right. Lithium is a native element, a soft silvery-white metal.

Lithium’s energy works well with its family – other Lithium-rich minerals.  Try it in combination with Lepidolite and Petalite 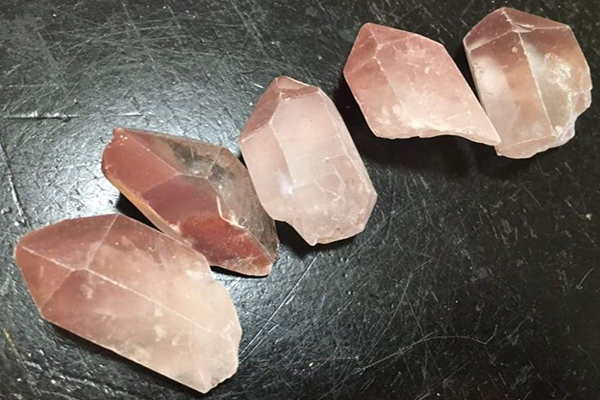 Lithium is found in both sedimentary and igneous rocks. But Lithium Quartz forms only in the igneous process when hydrothermal veins contain both magma and liquid water. Because of the high pressures, the water stays in a liquid form rather than being a vaper. The hot water dissolves various minerals in the original rock and slows down the growth process of new minerals like Quartz. As the Quartz slowly grows, it can acquire a thin film of Lithium which had dissolved in the hot water. While pure Lithium is silvery-white, when it interacts with silica it gives the Quartz a pinkish-purple hue. As the Quartz continue to grow, it will cover up that Lithium layer, leaving the Lithium encased within. In some cases, the Lithium will be found on both the inside and the outside of the Quartz crystal.

Lithium Quartz’s energy works well with its “friends” – crystal associates formed in the same geological environment.  Try it in combination with Tourmaline

Lithium Quartz is a relatively new crystal to the metaphysical world.  As such, it is not included in any of the older lapidaries, texts that describe gemstones and their powers.  It is included in some of the newer lapidaries and is a popular Quartz inclusion among collectors.  Lithium is a primary focus for several industrial-scale mines that are responding to the high-demand for lithium batteries in our increasingly tech-driven world.  As a result, lithium mining has become an increasingly lucrative business.  Most lithium is mined in from brine pools were it is extracted from desert salt pans. Lithium Quartz, however, comes from small artistanal mines that serve the healing crystal market.

Lithium is a native element, a soft silvery-white metal, with the lightest weight of any solid substance.  On Earth, it never appears freely, like other metallic elements such as gold, silver or copper.  Instead, lithium is always found as a chemical compound, mixed with other native elements to create a mineral or a rock.  For example, lithium is what gives the mineral Lepidolite its purple-color and Petalite its pink color.  While Lithium also contributes to Granite’s silvery-white sparkle.  Lithium Quartz has a faint pink blush because of trace amounts of lithium in Clear Quartz. Lithium was first discovered in 1817 when Johan August Arfwedson (1792-1841), a Swedish mineralogist, was analyzing the newly-discovered mineral, Petalite.  The unknown material in Petalite was similar in structure to sodium and potassium, but unlike those two, the mystery material did not dissolve in water.  It was named lithion /linthia from the Greek word lithos, meaning “stone” to reflect the fact that it stayed solid, while the metal inside the mystery material was named Lithium.

In 1949, Jade Cade (1912-1980), an Australian psychiatrist popularized the use of lithium to treat “manic depression.”  He had conduct simple experiments in an unused kitchen at a mental hospital, testing the urine from healthy and mentally-ill people.  He discovered that the uric acid of mentally-ill people was more toxic than that of healthy people.  He then experimented with making different artificial solutions of healthy uric action to see how it could be manipulated and better understood, using guinea pigs as test subjects.  He eventually added Lithium to the mixture meant for a control group, and discovered the guinea pigs were more restful.  Further research revealed that it was the Lithium itself that was responsible for the calming effect.  He tested it on himself to ensure that it was safe for humans, and then a small trial among 10 of his patients with manic depression.   The positive effect was so pronounced, that Cade published a paper proposing that manic depression is caused by a lithium deficiency.  A few years later, Cade briefly abandoned his experiments with Lithium after discovering that lithium itself can be toxic if too much lithium builds up in the bloodstream. But other scientists continued to experiment until eventually the reasonable dosage was found and it soon gained wide-spread acceptance.  Lithium became the first effective medication to treat a mental illness.  Today, it remains the principle medication for treating bi-polar disorder.