Morganite connects us to all the Great Forces of Love and Goodness in the Universe.

Morganite connects us to all the Great Forces of Love and Goodness in the Universe. It invites us to surrender to Love and to allow it to direct our course. It frees us from dogma and fanaticism which leads us astray and brings us closer to what is True and Real. Morganite teaches us that our strength is found in our tenderness and our courage is in our compassion. It protects us so that we dare to be vulnerable and open to receiving love and showing love to others. Morganite is a phenomenal stone for anyone who practices compassion-based meditation, taking on the suffering of others and sending them peace and healing. Morganite inspires a love of live and of all beings.

Morganite is a wonderful love stone. It can be used to attract our soulmates as well as to nurture existing relationships so that they are long-lasting, healthy and happy. Morganite is particularly useful for anyone who has has suffered deep emotional trauma and/or grief. Morganite lifts away any pain that is lingering inside and helps us to process through heavy emotions and release them completely. It also shows us how to dissolve any conscious or subconscious resistance we may have to our own emotional healing and growth. Morganite brings us a feeling of peace, security, joy and a belief in our own inner-strength. It can help us to gently observe our own emotional patterns, particularly those that are fear or judgement based, and develop new patterns, based on love.

Morganite soothes the mind so that we can think clearly and determine the best course of action. It reduces chronic complaining and reminds us to take action to fix whatever is causing us irritation, or else to let it go. Morganite encourages us to think positively and constructive. It also teaches us to take responsibility for our own actions, words and thoughts. It dissolves feelings of helplessness and victimhood, and shows us a path forward to empowerment and peace. Morganite is also a fantastic stone to work with when we need to have a better work-life balance. Morganite teaches us to not take ourselves so seriously or to make our work the center of our lives. Instead, Morganite reminds us to take plenty of time to play and relax.

Morganite is used by metaphysical healers mainly to treat the heart. It is also said to benefit the nervous system and stress-related illnesses. It is additionally believed to help the lungs and to help with oxygenation at the cellular level. Metaphysical healers also use Morganite to treat asthma and tuberculosis.

Buy Morganite or Crystals with a Similar Energy

Where does Morganite come from?

Morganite’s energy works well with its family – other minerals.  Try it in combination with

Morganite’s energy works well with its “friends” – crystal associates formed in the same geological environment.  Try it in combination with

Morganite is a pink/peach variety of Beryl. While its more famous “siblings” Aquamarine (blue Beryl) and Emerald (green Beryl) have been beloved for generations, Morganite was first identified in the early 20th century. As a result, it was not included in any of the older lapidaries. Morganite was first identified in 1902 from a deposit in Madagascar, with a second deposit found sooner after in California, USA. The New York Academy of Sciences officially named the pink gem, Morganite after the American banker and gemstone collector, J.P. Morgan (1837-1913).

At the turn of the century, J.P. Morgan owned the most important gem collection in the United States, with over 1000 precious pieces. He exhibited this gem collection at the World Fair in Paris in 1889, the same fair for which the Eiffel Tower was built. Morgan’s gem collection was curated by Tiffany & Co’s chief gemologist, George Fredrick Kunz (another pink gemstone, Kunzite, is named in his honor.) The gem collection won two gold medals and drew attention to Morgan from the mineralogy and lapidary industries. Morgan then hired Kunz to locate and put together a second gem collection, more than twice the size of the first. In addition to collecting individual gems, Kunz also helped orchestrate the purchase of existing collections. Most notably, Morgan acquired the gem collection of the Clarence S. Bement, a Philadelphia industrialist with a passion for mineralogy. Morgan paid over $100,000 for the collection, the equivalent of 2.5M today. Morgan’s new collection was publicly displayed at another Paris exhibit in 1900. Upon Morgan’s death, both gem collections were donated to the American Museum of Natural History in New York City, where Kunz curated. They can be seen there today as the Morgan-Tiffany and Morgan-Bement Collections.

Kunz was a member of numerous mineralogy organizations and other scientific, cultural and historical societies, and served as Vice-President for the New York Academy of Sciences. The Academy helped identify and give the official name to a new pink gemstone. On December 5, 1910, Kunz encouraged the Academy to name it “Morganite” to honor JP Morgan’s financial support of the arts and sciences, and his contributions to gemology.

In 1989, the largest specimen of Morganite was discovered in Bennet Quarry in Maine. Known as the “Rose of Maine” it weighs over 50 pounds. It was originally a bright orange color, but has since changed to pink due to exposure to sunlight. 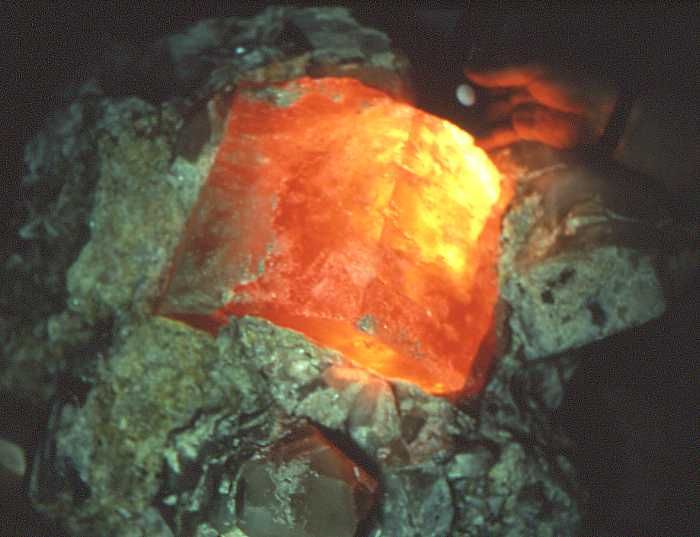 Rose of Maine, lit by flashlight in the mine