Obsidian was not included in most early lapidaries, texts which describe gemstones and their powers. However archaeological evidence reveals that Obsidian was used to create some of the very oldest cultural artifacts in human history. In fact, Obsidian was also used by our evolutionary ancestors and cousins! Which makes it one of the few healing crystals that can help us understand who we are, where we came from, and perhaps where we are going…

We are the only species in the history of our planet capable of writing – and we only developed this skill in 3000 BCE. Anything before that time period, therefore, requires a certain amount of conjecture. Is a stone figure of a female body proof of goddess worship? Maybe. It could also be a stone Barbie.  The line between purely practical and possibly spiritual are not always easy to detect in the archaeological record.

The very earliest Obsidian tools date to the Oldowan, at the very dawn of the Paleolithic/Stone Age (2.6 million -10,000 BCE). Archaeologists believe that the very earliest hominid to use stone tools was Australopithecus garhi (2.5 million BCE) who lived in Ethiopia and is believed to be one of our direct ancestors. Among the fossil remains for this early hominid are obsidian tools used for chopping, scraping, and piercing. Sometime later two other early hominids began making stone tools; Homo habilis(2.4-1.4 million BCE), whose name means “Handy Man” precisely because he used stone tools, and Homo erectus (1.89 million – 143,000 BCE), the first hominid to stand upright like a modern human. Whether each species discovered stone tools independently, or were taught to use them, is a matter of speculation. Equally so, it is impossible to know whether these tools were purely practical or if they had any spiritual purpose. By the time we Homo sapiens came along (about 200,000 BCE) we shared the Earth with three other hominid species, Homo erectus in Africa, Europe, and Asia; Homo neanderthalensis (200,000-40,000 BCE) in Europe; and Homo florensinsis (95,000-17,000 BCE) on the island of Java; all of whom used stone tools, including spear points. Once again, it is not always easy to determine if there was any spiritual purpose behind these tools. However, we can tell from Neanderthal sites that they buried their dead, made ivory jewelry, and possibly created art, even tattoos! This indicates they were sophisticated enough to have some type of spirituality, which may have extended to giving ritual purpose to stone tools. If they did, Obsidian would have been the obvious choice. 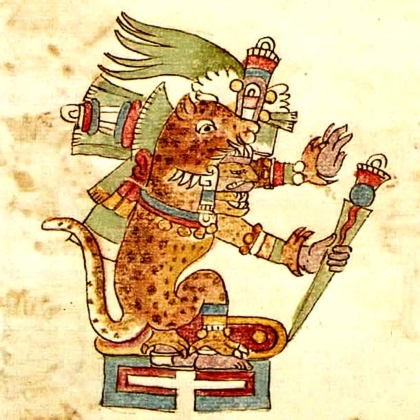 Tezcatlipoca as a Jaguar, Codex Rios

At the dawn of human civilization and writing, we know that Obsidian was definitely being used for ritual purposes. In Egypt, Obsidian knives were used for ceremonial circumcisions, as well as to make mirrors and various decorative objects found in tombs. The actual name “Obsidian” was first used by Pliny the Elder (CE23-79) who named it after a Roman citizen/explorer, Obsius, who “discovered” it in Ethiopia. During the ancient and medieval period, Obsidian was thought to drive out demons, and was used as an aid in rituals. It was also used to heal wounds and alleviate pain.

Obsidian was also widely used in the Americas. In Central and North America, Obsidian was a symbol of Tezcatlipoca, the chief god of the Aztec religion. Tezcatlipoca was the god of night, storms, kings, shamans, war, and beauty. He was depicted as a Jaguar, an incredibly potent symbol for spiritual power and authority. When the Aztecs practiced human sacrifice, it was an Obsidian knife that was wielded. The name Tezcatlipoca translates to mean “smoking mirror,” likely a direct reference to Obsidian mirrors used by Mayan priests for divination and shamanic purposes. These mirrors were carved out of pure Black Obsidian and were said to reveal a person’s flaws as well as the steps needed to make the appropriate change. Obsidian was widely traded throughout both South and North America. Each volcanic explosion creates a unique type of Obsidian, and so it is relatively easy to trace trading routes. In addition to making knives and mirrors, Obsidian was also used to make talismans for protection.  On Easter Island, Obsidian was used to make the eyes of the Moai statues. Today, the eyes are long gone, but stories passed down through the generations bear testament to what they once looked like.