Opal is included in virtually every known lapidary, texts which describe gemstones and their powers. Most of the legends associated with Opals refer specifically to the Precious Opals that contain a flashing “fire” of color inside them. Tumbled Opals, by contrast, are known as Common Opals, and have a flat color. The name Opal most likely derives from the the Sanskrit upala, meaning “precious stone.” It has also been suggested that the name may also come from Ops, a Roman Earth Goddess associated with fertility and the harvest.

At one time, Opals commanded a higher price than any other gemstone, far higher than Diamonds or Rubies. Pliny the Elder (CE 23-79), a Roman author, naturalist, and philosopher described Opal in his lapidary, The Natural History of Precious Gemstones. He related that a generation before him, there had been an enormous Opal, as big as a hazelnut, which was worth more than a villa. It was owned by a Roman Senator named Nonius. Marc Antony, the most powerful man in the Roman world at that time, demanded that the Senator give the gemstone to him. Nonius refused and fled, leaving all his worldly possessions behind, taking only the Opal.

There are numerous myths associated with Opal, many of which are gruesome. According to one legend, Opal was created when the Storm God grew angry and jealous at the Rainbow God. The Storm God shattered the Rainbow God with his lightning, and cast his body down to the earth in a million little pieces. When the pieces landed, they petrified and turned into Precious Opals, which still sparkle with a rainbow of colors. In another story, Opals were formed by the Norse smith-god Volömer, who stole children’s eyes and used them to fashion the pretty gems.

Some of the stories associated with Opal appear to trace back to an allegory in Plato’s Republic (380 BCE). Once upon a time, a poor shepherd named Gydes from the kingdom of Lydia left his home in search of adventure. During his journey, Gydes survived an earthquake and saw a chasm opened up in the Earth. He went inside and saw a corpse wearing a ring with a precious stone. He stole the ring and returned to Lydia. He soon discovered that the stone could be manipulated to make the wearer invisible. He used the ring to sneak into the bedchamber of the Queen and make love to her, and then later killed the king. The Queen married Gydes and elevated him to the throne, and the two lived happily ever after. The purpose of this story in the Republic was to ponder whether or not an intelligent person would behave morally if they had no fear of being caught or punished for any misdeeds. While Plato did not name the stone specifically, later historians agree that that the stone was an Opal. Opal was widely believed to be able to confer invisibility and was also nicknamed, the patronus furum, or “Protector of Thieves.”

Despite these unsettling stories, during the ancient and medieval period Opal was seen as a symbol of hope and purity. In one of the myths of Orpheus, the legendary Greek musician, Opal was described as “the delight of the immortals.” During the Roman Era it was sometimes referred to as cupid paederos, or “Cupid’s Stone” because of its bright color and flashing fire, as well as how it inspired love in all who beheld it. During the nineteenth century, Opal became associated with bad luck, an idea which may have first been promoted by the jewelry industry as an explanation for why Opals fracture so easily, even when treated with care. As proof, the jewelry industry nodded towards a novel by Sir Walter Scott, Anne of Geierstein, (1829), in which an enchanted princess named Hermione wore an Opal in her hair, which mimicked her moods with its flashing colors. She married a man she loved and bore him a daughter. But when it came time for the christening, a drop of Holy Water splashed on the Opal, turning it into a dull pebble and sending Hermione into a coma. The next morning Hermione’s body was gone, only the dull pebble and a pile of ashes remained.

However, the reputation of Opal as a symbol of bad luck may also have been related to the Spanish Royal Family. During the summer of 1885, King Alfonzo XII (1857-1885) died during an outbreak of cholera. His mother, sister, and sister in-law also died. Queen Maria Christina (1858-1929) believed that these deaths were due to a “fatal gem,” an Opal that the King had given to her on their wedding day. She had the Opal made into a necklace, and hung it around the neck of the statue of the Virgin of Alumdena, the female patron saint of Madrid. No more deaths rocked the royal family, and the Opal necklace remains in place to this day.

Today, the vast majority of Opals come from the outback of Australia. The “Opal Capital of the World” is the small desert town of Coober Pedy, in Southern Australia. Opals were discovered in the desolate Stuart Mountain range in 1915, by a 14-year-old boy named Willie Hutchinson. He and his father were searching for gold but instead found a mother-lode of pale white sparking gems.  An Opal Rush began, and hundreds of men seeking their fortune poured into the “Stuart Range Opal Field.” This name was deemed too boring, and was replaced with kupa piti, Aboriginal words that meant “the boy’s watering hole,” a nod to Willie Hutchinson. In a bizarre turn of events, Willie died in 1920 while swimming in a water hole. Kupa piti gradually become Coober Pedy, which local residents now claim means “white man in a hole.” 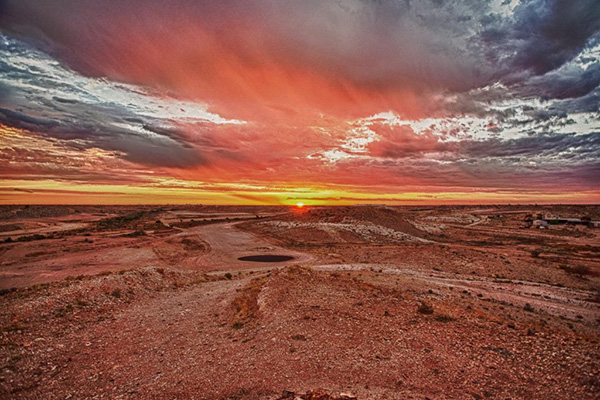