Published May 2014  •  Updated June 2022  •  Read Time: 6 minutes
Prehnite is a green or yellowish silicate mineral that grows in little globes in volcanic rocks or sometimes as stalactites clinging like icicles to the roof of caves.  In some locations, the Prehnite is intergrown with fine epidote needles.  Prehnite was first described in the mid-18th century when a Dutch colony was found at the Cape of Good Hope.  Today, Prehnite from South Africa or nearby countries is sometimes sold as “Cape Emeralds.”  Prehnite has a very relaxing and loving energy that creates a sanctuary-like atmosphere.  It is a wonderful addition to gardens and for use in feng shui.  It is an excellent choice for healing spaces as well as a good friend to take along to therapy.

Prehnite reminds us that we are intimately connected to the Divine and all of creation.  Moreover, these connections provide a limitless source for healing energy and spiritual enrichment.  Prehnite enhances our ability to visualize and communicate with beings from other dimensions, such as fairies, extraterrestrials and angels, particularly Archangel Raphael, the angel of healing. It also amplifies our spiritual hearing, allowing us to receive important insights during meditation and prayer, as well as during intuitive or psychic readings.  Prehnite is a particularly effective stone for grid work, especially large outdoor pieces, providing harmonious energy and a protective vibrational field.

Prehnite carries the essence of unconditional love.  It has a soft, gentle energy that clears away negative emotions so that they don’t become entrenched in our emotional body.  It helps us to not take issues personally or hold on to grudges.  Prehnite leaving us feeling emotionally clean and refreshed. It helps us to let go of anything we no longer need, whether that means physical objects that are cluttering our space, or emotional beliefs that are separating us from joy and peace. Prehnite helps us to trust ourselves and the world around us more.  It is a wonderful Feng Shui stone and can be used to turn a space into a loving home and peaceful sanctuary.

Prehnite helps us to stay in the present moment and to resist the impulse to engage in negative imaginings, such as ruminating on the past or visualizing a disastrous future.  It is an empowering stone, encouraging us to make important decisions and to take action, rather than giving into avoidance behaviors. It encourages us to accept the truth, even if unpleasant, and to ask ourselves, “knowing what I currently know, what is the most loving and logical course?” and to act act accordingly.  It helps us to stay calm and be prepared no matter what happens.  Prehnite can help us to work through phobias and reduce nightmares.

Prehnite is recommended when we need to identify and solve problems that are negatively impacting our physical body.  For example, if we are so stressed at work that we’ve developed insomnia.  We can’t just focus on the insomnia since that’s merely a symptom of the larger problem.  We have to study the underlying stress and make real, physical changes to our life.  Prehnite helps us feel safe enough to look at root causes and make practical decisions that serve our Highest Good.   It reminds us that we are complex beings and that our spiritual, emotional and mental life have a powerful impact on our physical body.  Likewise, problems in our body, will impact our mood.  A wise person recognizes this interconnectivity and adjusts accordingly.  Prehnite is highly recommended for healers, both to help patients as well as to “heal the healer.”  Prehnite is a beautiful talisman for the heart, kidney, and bladder.

Buy Prehnite or Crystals with a Similar Energy

Where does Prehnite come from?

Prehnite is found in volcanic rocks, particularly Granite, and is mined as a secondary mineral.  Prehnite can be tan, white, and yellow, but the best crystals are transparent green.   All Prehnites are fully natural, enhanced only by cutting and polishing.

Prehnite is a Phyllosilicate mineral. Silicates are minerals which contain the elements Silicon (a light gray shiny metal) and Oxygen (a colorless gas). Together, these two elements form a tetrahedron – a shape similar to a pyramid – with a Silicon atom in the center and Oxygen atoms at each of the four corners. These tetrahedra connect with other chemical structures, in six different ways, to form various minerals and rocks. There are six main groups of Silicate minerals, and these main groups are further subdivided into secondary subdivisions, such as Quartz and Feldspar. Prehnite belongs to the Phyllosilicate group, whose tetrahedra connect at three corners to form hexagonal rings.

Prehnite’s energy works well with its family – other Phyllosilicate minerals.  Try it in combination with Apophyllite, Cavansite, Chrysocolla, Fuchsite, Lepidolite, Seraphinite and Serpentine. 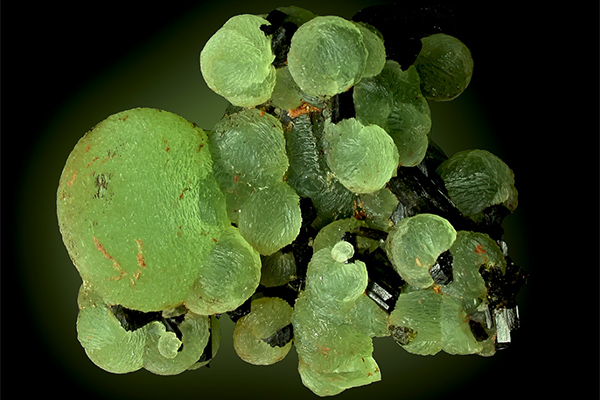 Prehnite typically forms in the cavities of volcanic rocks associated with zeolites and calcite and in the mineral veins in granite.  Most of the time it grows as stalactites or in bortryoidal (rounded) shapes.  On rare occasions. it may form distinct, individual crystals.  It is rarely transparent, but often translucent.

Prehnite’s energy works well with its “friends” – crystal associates formed in the same geological environment.  Try it in combination with Epidote and Stilbite

How does Prehnite with Epidote form?

Prehnite is a relatively “new” healing stone whose healing properties have only recently been explored. It was not included in any of the older lapidaries, texts that describe gemstones and their powers.  Prehnite was first discovered in the dolerite hills of Karoo, a semi-desert region of South Africa.

During the late eighteenth century, the southern most tip of Africa was a Dutch Colony, centered around the Cape of Good Hope.  Prehnite was found by Hendrik Von Prehn (1733-1785) during his time as commander of the military forces of the Colony from 1769-1780.  Von Prehn, like many other aristocratic men of his time, was well educated in languages and interested in the natural sciences, including geology and mineralogy.  Correctly believing that he had found a new mineral, he brought back an example of the green stone to Europe where it was analyzed by the German geologist, A.G. Werner (1749-1817).  In 1788, Werner officially determined that Prehnite was a new mineral and named it after its discoverer, who had recently passed away. This marks the first known instance of a mineral being named after a person.

Occasionally, Prehnite is marketed under the name of “Cape Emeralds.” This strategy cashes in on the higher name recognition and drives the price up, much in the same way that Prasiolite may be marketed as “Green Amethyst”.  But Prasiolite and Amethyst are essentially the same mineral, the only difference being color.  Prehnite and Emerald, are both green, but are otherwise completely distinct minerals.