Published January 2015  •  Updated July 2022  •  Read Time: 8 minutes
Preseli Bluestone is a rare variety of Dolerate, an igneous rock.  It is found only in the Preseli Hills of Wales in the United Kingdom.  It’s great claim to fame is that these stones form part of Stonehenge, a famous prehistoric monolith in southern England.  According to legend, the stones were brought by magic by the wizard Merlin in the years before King Arthur’s court.  When left rough, it is a blue-grey stone, but when polished Preseli turns bright green.  Energetically it is unsurprisingly tied to the energy of the Old Ways, of druids and the shamans of old Europe.  It is highly recommended for mystics that delight in the natural world and its rhythms.

Preseli Bluestone sings of magic and mystery. It is linked to the Old Ways, the ancient religions which have been lost to the mists of times. Preseli Bluestone opens the doorways of space and time, giving us rare insights into the past and future and showing us the way forward in our present. It anchors the body during spiritual work and amplifies the power of rituals. Preseli Bluestone is a particularly good crystal ally for druids, shamans, mystics and other Light-workers who are deeply in tune with the natural world. It stimulates psychic and intuitive powers, and can help us to find the right words to describe soul sensations and inner knowings, which may be difficult to communicate clearly. Preseli Bluestone also can help us to find our way again, when we are spiritually/emotionally adrift. It can help us to remember the past, but to live firmly in the present and looking forward to the future.

Preseli Bluestone provides a deep earth connection that helps us to feel emotionally grounded and safe. It celebrates true friendships, and helps us to maintain our relationships with those soul friends who make our hearts happy. Preseli Bluestone enhances self-confidence and helps us to trust our own rhythms, resting when necessary and going into action when the time is right. It can also help us to listen more carefully, understanding not only what people say, but what they mean. It also helps us to accurately assess whether or not people are speaking truthfully. Presli Bluestone demands that we act honorably and speak the truth without fear. It ignites our courage and invites us to step into our personal power.

Preseli Bluestone gives us focus and stability, helping us to cut through emotional distractions and see right to the heart of what is real and true. It encourages us to explore our roots, ancestors, and culture. Preseli Bloodstone is an excellent stone for teachers/mentors and students, celebrating that special connection and encouraging wisdom to flow freely. It shines a light on our path, helping us to know what to do next and which direction to go in our life. Preseli Bluestone encourages us to go after our loftiest dreams, but to be smart and clearheaded about it, rather than foolhardy and impulsive. It reminds us always to THINK! To use our head and not going running off without it!

Preseli Bluestone is recommended for energetic healers conducting rituals involving sound healing, laying-on-of-stones and/or healing circles. It helps healers to concentrate the healing energy, adding depth and resonance to the ritual. Preseli is also a wonderful talisman for elders suffering from the various inconveniences and discomforts associated with old age. It offers comfort and support during moments of pain, but also encourages acceptance and self-love for the current stage of life. Preseli helps us to grow old beautifully, enjoying our gray hair and wrinkles as proof of a long life, well lived.

Buy Preseli Bluestone or Crystals with a Similar Energy

Where does Preseli Bluestone come from?

The only deposit of Preseli Bluestone is Preseli Hills in Western Wales.

The original Preseli Bluestone came from Carn Meyne, a rocky outcropping in the Preseli Hills of Western Wells. Today, Carn Meyne is protected from both commercial mining and amateur rockhounds, so it is illegal to remove any stones from Carn Meyne or the immediate surrounding area. Some of the Preseli on the market comes from private sources of stones that were taken from the mountain before any laws were put in place. Recently, a small business near Preseli Hills has secured exclusive rights for quarrying. The stones do not come from Carn Meyne, but rather a nearby location and are geologically identical.

Green Dolerite from other locations have on occasion been sold as “Presli Bluestone”. True Preseli Bluestone comes from Wales and will contain white spots, although depending on the size of the stone, spots may or may not be present! Always buy from a reputable seller. Preseli Bluestone are fully natural, and not enhanced in any way besides cutting, tumbling and polishing.

Preseli Bluestone  is not a mineral, but rather an altered igneous rock. As an easy way to understand the difference, think of rocks as being like cookies and minerals as being the ingredients which make up those cookies. Many different minerals are used to create a rock! In the case of Preseli Bluestone, the rock is a rare variety of Dolerate (more commonly called Diabase in North America). The main chemical element is Calcium and the major minerals are Feldspar (green) and Augite (black). Many stones are also flecked with white chalk or Snow Quartz. Preseli Bluestone is a slightly metamorphosed Dolerite, created by low grade regional metamorphism. The original Dolerite rock was of igneous origin and formed at medium to shallow depths within the Earth’s crust.

Preseli Bluestone’s energy works well with its “friends” – crystal associates formed in the same geological environment.  Try it in combination with Chalcopyrite

Preseli Bluestone has a very unique metaphysical history. Thousands of years ago it was one of the stones used to build perhaps the most famous prehistoric structure in the world – Stonehenge. But, then it was largely forgotten, its healing powers remembered only in local folklore and lengend in western Wales. In the twenty-first century, Preseli Bluestone was re-introduced to the global healing crystal community after a team of geologists and historians determined the it was used to build the inner ring of Stonehenge. Overnight, Preseli Bluestone became an immensely popular stone, helped in part by it’s reported metaphysical powers as well as the very limited supply.

This stone goes by many names, Preseli is reference to the Preseli Hills in Western Wales, where this stone is mined. It is also called “Bluestone”, which can be confusing to collectors when they first see polished specimens. In its roughest form, the stone often appears blue-grey, but it takes on a blue-green color when polished or tumbled. While Dolerite (also called Diabase) is a relatively common igneous rock, the particular variety called Preseli Bluestone has been metamorphosed and has white spots on it, a trait unique to a very small region in Pembrockshire, Wales.

Stonehenge is a prehistoric structure located in southern England which was built sometime between 3100-2200 BCE. The archaeological evidence largely suggests that it was built gradually and added on to over the course of that 900 year period, rather than constructed at a single time.  A variety of different stones were used in its construction, with Preseli Bluestone being added in 2900 BCE, before the giant sarsens were added.  The culture that created it had no written language, and so Stonehenge’s purpose and methods of construction will probably always be open to debate. One fact that is undeniable is that Stonehenge was purposefully designed to align with the solstices, although for what purpose we will never know. For centuries, many civilizations worldwide have looked to the solstices and equinoxes as a time of celebration and spiritual reflection, and it is reasonable to suppose this would have been true in prehistoric England as well. Recent archaeological digs have also firmly established that Stonehenge was a burial site, although who exactly was buried there and why remains a subject of debate. 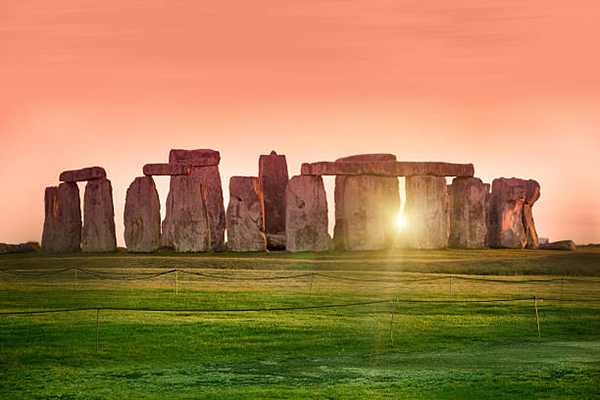 Equally mysterious is the question of HOW it was built, since it is composed of enormous stones that come from a mountain range more than a hundred miles away, and was built before the wheel was introduced to Britain. For centuries the obvious conclusion was “magic.” Many have said it was the Devil that moved them, who stole them from a greedy old woman.

But since the 12th century, the primary individual credited with building Stonehenge is Britain’s most powerful wizard, Merlin. The legend was first mentioned in Geoffrey of Monmouth’s Historia Regum Britanniae – a history of Britain which is one of the primary sources for the beloved story of King Arthur. In it, the stones were originally from Africa and brought to Ireland by a race of giants who danced around them and infused them with healing power. Merlin brought the stones to England using magic and his connections with the Giants, and erected it on Salisbury Plain as a war memorial for King Aurilius Ambrosia. As the story continued, after Aurilius Amborsia’s death he was buried at Stonehenge, and he was succeed as High King by Uther Pendragon, who in turn was succeeded by his son Arthur.

Among the local people who live near Preseli Hills, a common folk-remedy for healing is to soak a small piece of Presli Bluestone in water and to drink the elixir. This type of practice is well documented throughout formerly Celtic lands. Elixirs made from “holy stones” were said to cure a wide assortment of diseases.