Published June 2014  •  Updated July 2022  •  Read Time: 6 minutes
Sunstone is a sparkly gemstone with a joyful energy.  The name can be attached to a variety of iridescent Feldspar minerals, as is the case for its sister-stone Moonstone.  What distinguishes a Sunstone is its orange, golden or full rainbow sparkle that flashes and twinkles in the light.  Its history dates far back into antiquity where it was associate with the Hindu sun-god Surya as well as the Greek sun-god Apollo.  Sunstone sings of confidence, happiness, good luck and success. It is a powerful talisman for abundance and can help us to cultivate both financial and spiritual prosperity.  It reminds us to be generous with our love and our good fortune.

Sunstone is a joyful stone which encourages us to be true to ourselves. It is a stone of great hope, helping us to believe in our own good luck and ability to live happily ever after. Sunstone is a stone of abundance and can be use to manifest financial prosperity as well as spiritual riches. As it’s name indicates, it represents solar energy and brings gifts of Light and Energy.

Sunstone infuses fresh energy to our emotional life. It acts as an anti-depressant and motivates us to do they things we enjoy and to live in the present moment. Sunstone helps us to transform our emotional patterns, it is particularly good for releasing “victim mentality” and instead shows us that we have the power and ability to make positive changes in our live. Sunstone encourages us to be independent, brave and comfortable in our own skin.

Sunstone brings a whirl of fresh thinking and problem-solving. It encourage us to see the “obvious” solution that was always lurking in the back of our minds. That solution might be cautious and practical or wildly daring – either way, it gives us the self-confidence to trust ourselves to be successful in our ventures. Sunstone is a stone that teaches leadership and creativity, and encourages us to use our power and gifts in service to the Highest Good.

Sunstone is a wonderful stone to stimulate our powers of self-healing and to explore the mind-body connection. It helps us to be calm and confident when faced with health issues, wisely remembering that panic and stress only exasperates problems. Sunstone reminds us that self-healing doesn’t necessarily mean we shut ourselves away from other healing modalities. Self-healing can include being open to a variety of possibilities, from ancient meditation practices to the latest surgical advances. Self-healing can include being our own healthcare advocate, seeking out second opinions, following doctor’s orders as precisely as possible and making important lifestyle changes. Sunstone invites our mind and soul to work with our physical body to give it the best chance of reaching optimal health. It is also a fun talisman for anyone exploring sexual satisfaction and for athletes who want to push the body to the next level.

Buy Sunstone or Crystals with a Similar Energy

Where does Sunstone come from?

Typically mined from the primary deposits still having their original relationship with the host rock.

All Sunstones are natural, enhanced only by cutting and polishing.

Sunstone is a term used to describe a variety of orange Feldspar minerals, all of which belong to the Silicate mineral family.  Silicates are minerals which contain the elements Silicon (a light gray shiny metal) and Oxygen (a colorless gas). There are six main groups of Silicate minerals, and these main groups are further subdivided into secondary subdivisions, such as Quartz and Feldspar. Feldspar is a large mineral family in its own right and is subdivided into Alkali Feldspars (rich in Potassium) and Plagioclase Feldspars (rich in Calcium).  Sunstone is the name used for several types of Feldspar which show a orange or golden iridescence when cut properly. Most are technically Oligoclase, but they can also be Adularia, Albite, Anorthoclase, Orthoclase or Sanidine.  Some of these same minerals may also be termed Moonstones.

Sunstone’s energy works well with its family – other Feldspar minerals.  Try it in combination with Amazonite, Labradorite, and Moonstone 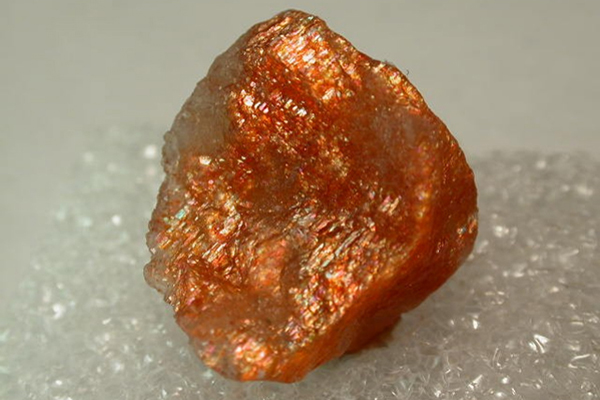 Sunstone may be formed through igneous, sedimentary or metamorphic processes. Its most famous feature is an orange or golden iridescence. This shimmer is called the “schiller effect” and is caused by a tiny layers of various Feldspar minerals (most notably Albite) which are laid down during the crystallization process.

Sunstone’s energy works well with its “friends” – crystal associates formed in the same geological environment.  Try it in combination with Iolite and Sodalite.  Or explore how it’s energy feels when fused with a friend: Sunstone Iolite and Sunset Sodalite

What is the difference between Sunstone and Peach Moonstone?

Sunstone and Moonstone are popular names that can be ascribed to a variety of Feldspar minerals.   Most Moonstones are white or creamy off-white, but some are black, green or even light orange.  The orange ones are called Peach Moonstone.  So what’s the difference between a Sunstone and a Peach Moonstone?  Generally speaking, the only difference is the color of the iridescence.  If the stone glows orange, gold, or shows a full rainbow it’s likely to be called Sunstone.  If the stone has a silvery-white iridescence it will generally be called Peach Moonstone.

Unlike most healing stones, Sunstone isn’t a single mineral or a rock, but rather the title given to a variety of Feldspars that show a shimmering warm iridescence. Sunstones range from bright orange to golden-brown and has been closely associated with the sun and sun gods since antiquity. Until relatively recently it was far more rare than its well-known “sister-stone” Moonstone.

According to ancient lapidaries, texts which describe gemstones and their powers, the earliest known Sunstones hailed from India. In its native country, Sunstone was linked to Surya, the sun god, and was believed to protect its carrier from the dark forces of the spiritual realm.  Surya rides his sun chariot pulled by seven horses, with each horse representing the seven colors of visible light and the seven colors of the chakra.  In ancient Greece, the gem represented the sun gods Apollo and/or Helios and was believe to bring good fortune to anyone who carried a piece in their pocket. It was also believed to give physical vitality and strength and to act as an antidote to poison. While large deposits of iridescent feldspar minerals are in fact located in Norway, this stone can not possibly be the legendary “Sunstone” or Viking Compass, which helped Viking mariners navigate the oceans. Celebrated in the Nordic Sagas, the Viking Sunstone allowed navigators to locate the sun when it is hidden by fog, using the mineral’s natural polarizing optical properties. Today, historians and geologists alike believe that this mysterious compass was actually either an Iceland Spar (a type of Clear Calcite) or the blue gemstone Iolite.

Sunstone is also found in North America, both in Canada and the United States. The First Nation tribes in Eastern Canada used the gem in the center of medicine wheels. It was reported that when the spirit guides were successfully contacted, that the Sunstone would begin to glow with a golden light. In Oregon, the Native American tribes believed that Sunstone’s shimmery color was due to the dripping blood of a great warrior who had been wounded by an arrow during one of his adventures. The blood carried his warrior spirit and infused the stones’ with his courage and power.