Published December 2015  •  Updated August 2022  •  Read Time: 6 minutes
Super Seven is a type of included Amethyst found in Espirto Santus, Brazil.  The economy in this small coastal state is mostly focused on tourism and manufacturing, rather than the mining.  But it does have some small-scaled Amethyst mines.  During the late 20th century, Melody, the crystal intuitive that wrote Love Is In The Earth, was shown some Amethyst with inclusions of Cacoxinite, Geothite, Hematite, Lepidocrocite, Quartz/Smoky Quartz and Rutile.  She was enchanted by this combination and studied its energy.  Today these stones are called Super Seven or “Melody’s Stone” and are sure to delight any crystal intuitive.

Super Seven invites us to do our part to raise the collective consciousness of humanity. It is a remarkable crystal ally for anyone who wants to save the world, heal the world, or make a significant positive difference in the world. Super Seven helps us to quiet our mind and emotions so that our Highest Spirit, using our own inner compass, can take the lead and show us the way forward. It challenges us to choose to be empowered, rather than victims or passive observers. It reminds us that we need to be regularly working on our own personal and spiritual development too, continually “growing up” rather than just stagnating at one level. Super Seven assists us in aligning our beliefs with our actions, so that we live with great integrity and inspire others to do so. Super Seven also helps us to discover and develop our psychic gifts and energy healing powers. It is particularly useful for individuals whose gifts include predicting the future, telepathy and astral travel, and reiki practitioners.

Super Seven helps us to step into our personal power and recognize how we can personally make a positive difference in the world. This difference doesn’t have to be on a global scale. The difference can start with us, and with our own family, friends and local community. Super Seven invites us to think about what we can do to help those nearest and dearest to us. It asks us to put more effort into our relationships and not take them for granted Rather than simply asking “how can I help?” or “let me know if you need anything”, Super Seven helps us to be more observant and thoughtful. It encourages us to get involved with other people’s passion projects and to invite others to be a part of our own. Super Seven releases our ego’s need to always be right or always in control. It helps us to stop wasting time and energy on being embarrassed or ashamed of mistakes, and instead simply own them, learn from them, and move on. Super Seven shows us the positive side of negative events, so that we can create a happier future rather than dwelling on a hurtful past. It reminds us that life is a journey, full of ups and downs and crazy turns, so be patient and compassionate to ourselves and others. Most of all, enjoy the journey as it unfolds!

Super Seven brings great clarity to the mind. It encourages us to be lifelong learners and and always expanding our mental horizons. It helps us to remember what we’ve already learned, while also seeing how it relates and connects to new information. Super Seven gives us a boost whenever we need to climb out of mental ruts and be truly open to new ways of thinking or doing things. In particular, Super Seven helps us to let go of whatever doesn’t actually work or serve us, and not to cling to something old simply out of habit. It is an excellent talisman for inventors, artists and entrepreneurs who want to share new ideas with the world. It inspires us to be pragmatic as well as creative, so that we can bring our ideas to fruition. When placed near a bed, Super Seven helps us to go to sleep easily and awaken refreshed.

Super Seven is primarily used by metaphysical healers to heal physical injuries and dis-eases linked to stress and other emotional, mental and spiritual problems. It is particularly useful when a patient requires a holistic healing strategy, to care for both the body itself, as well as the needs of the mind/heart/spirit.

Buy Super Seven or Crystals with a Similar Energy

Where does Super Seven come from?

Originally, the only known source for Super Seven stones was a single mine in Espiritu Santo, Brazil. Since the stone is of interest only to the metaphysical community, other mines largely ignored Super Seven stones since they weren’t particularly profitable. As the stone has risen in popularity, mine owners in Espiritu Santo have began to see it as a marketable mineral, worth the effort to mine and sell. Several mines are now said to produce Super Sevens.

All Super Sevens may be considered fully natural, enhanced only by tumbling, cutting, or polishing.

Super Seven is technically a rock, rather than a mineral. As an easy way to understand the difference, think of rocks as being like cookies and minerals as being the ingredients which make up those cookies. Many different minerals are used to create a rock! For Super Seven, the primary minerals are Amethyst and Cacoxinite, along with some combination of the following: Clear Quartz and/or Smokey Quartz, Geothite, Hematite, Lepidocrocite, and Rutile. A Super Seven stone may include 7 minerals, or just a few, depending on the quality level.   It is sometimes referred to as Amethyst-Cacoxinite or Amethyst with inclusions.

Super Seven’s energy works well with its family – other Quartz minerals.  Try it in combination with Blue Quartz, Citrine, Prasiolite and Rose Quartz 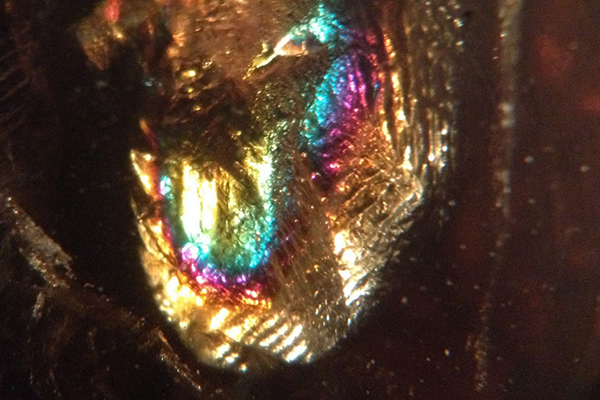 Super Sevens form in igneous rocks. The Cacoxenite, Geothite, Lepidocrocite, and Rutile typically grow first. Then the quartz crystal grows around it, eventually engulfing all the inclusions. Amethyst, Smoky Quartz and Clear Quartz are all formed from silica acid. Trace particles of iron within the silica acid gives Amethyst its purple color; otherwise, the silica acid would transform into Clear Quartz, or if naturally irradiated, Smoky Quartz. Super Sevens often show a combination of all three silica minerals, in addition to the other inclusions.

Super Seven’s energy works well with its “friends” – crystal associates formed in the same geological environment.  Try it in combination with Aquamarine and Topaz

Super Seven came to the attention of the metaphysical community in the 21st century. It was not included in any of the older lapidaries, texts that describe gemstones and their powers. Previously, this crystal would have been referred to as “Amethyst Cacoxenite” for its two primary minerals, or simply considered to be a “low grade” Amethyst with too many inclusions.

But right around the turn of the century, miners in Espiritu Santo, Brazil showed their Amethyst Cacoxenite crystals to Melody, the author of Love Is In The Earth, first published in 1995. Her book is one of the largest and most comprehensive crystal lapidaries ever written. (Her book is also a major source of information, often directly plagiarized, in many 21st century books and websites.) Melody was immediately attracted to the Amethyst Cacoxenites. After studying the crystals’ additional inclusions and feeling their wonderful metaphysical energy, she referred to it as “Super Seven” or “Sacred Seven”. The miners were so pleased by her enthusiasm that they began referred to it as “Melody’s Stone”.

The names were soon trademarked and the crystals were introduced to the open market in 2001. Other crystal intuitives soon got a chance to work with Super Seven and wholeheartedly agreed that they are a truly remarkable healing stone. Initially, only the original mine produced Super Sevens. But as the crystal has become more popular and in demand, additional deposits have been discovered in nearby mines. Today, this stone is sold under many different marketing names, which can be confusing for both sellers and buyers alike. Geologically speaking, Amethyst Cacoxenite would be the most accurate term, while Super Seven is the most famous marketing name. Melody, author of Love is in the Earth